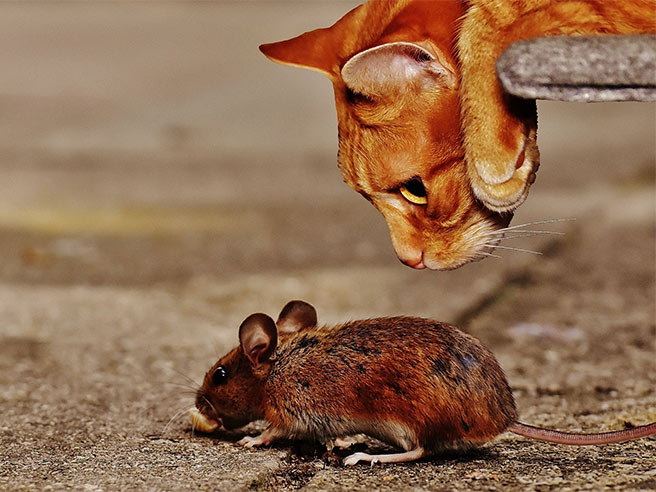 Encephalitozoon (E.) cuniculi is a common obligate intracellular microsporidian parasite of rabbits (Oryctolagus cuniculus), which is increasingly recognised as a pathogen of cats and other mammalian species.

Objectives: to review the literature on E. cuniculi in cats and provide recommendations for feline clinical conditions in which E. cuniculi should be considered as a possible differential diagnosis.

Conclusions:  E. cuniculi should be considered in cases of feline uveitis and cataract formation. It is not significantly associated with either chronic kidney disease or meningoencephalitis. E. cuniculi infection is more common in stray or feral cats than in pet cats.

Serological tests for antibody detection in blood are easy to perform and can be useful for diagnosis, but their specificity is low as antibodies have been found in apparently healthy cats. PCR appears more sensitive than histopathology for diagnosis, and is more sensitive when performed on cataractous lenses compared to aqueous humour, although ease of sampling is an obvious limitation. Treatment is with fenbendazole for 3 weeks and phacoemulsification to remove microsporidia from cataractous lenses.

E. cuniculi is a potential zoonotic infection, posing a special risk to immunocompromised humans from infected rabbits. Spore shedding has been infrequently identified in cats, so care should be taken around infected cats.

Encephalitozoon cuniculi is a common obligate intracellular microsporidian parasite of rabbits (Oryctolagus cuniculus), which is increasingly recognised as a pathogen of cats and other mammals. These unicellular microsporidia were previously considered “primitive” protozoa; however, more recent insight gained through molecular phylogenetic analysis is indicating  that these organisms are not primitive but instead degenerate, and that microsporidia are related to the fungal Kingdom, either as a basal branch of the Fungi or as a sister group (Han and Weiss, 2017). Four species have been identified by PCR and sequencing: strain I is the rabbit strain; strain II is the mouse strain,  strain III is from the dog (Didier et al, 1995) and strain IV is from the cat (Benz et al, 2011 and Benz personal communication) .

The susceptibility of cats to E.cuniculi infection was first reported in 1985, in an experimental infection of feline leukaemia virus-infected kittens (Pang and Shadduck, 1985).

A summary of prevalence data is shown in Table 1.

Cats, like humans, may also be infected by consuming water or food contaminated with infective spores (Wang et al., 2018).  Oral and nasal transmission has been described in rabbits (Harcourt-Brown and Holloway, 2003), but it is unknown if direct transmission occurs in cats. Two uninfected cats that had been in direct contact with infected ones tested negative for blood antibodies in one study (Benz et al., 2011).  In utero infection is seen in rabbits (Baneux and Pognan, 2003), but it is unknown if transmission by this route occurs in the cat (Benz et al., 2011). Rebel-Bauder et al. (2011) reported a case of generalised encephalitozoonosis in a kitten with cerebellar hypoplasia, which could have been related to in utero infection. Benz et al (2011) speculate that vertical transmission is necessary for cataract formation in the cat because vertical transmission is presumed to play an important role in the mechanisms by which the microsporidium enters the lens in rabbits and mink: the presumption is that the organism would be unable to infect a lens which already had a fully formed capsule.

In cats, ocular signs have been associated with E. cuniculi infection (Fig. 1).

Fig. 1: Ocular signs in a cat with confirmed E. cuniculi infection: keratic precipitates, which is evidence of anterior uveitis, in the right eye; cataract in the left eye. © Barbara Nell, University of Veterinary Medicine Vienna, Austria

Chronic kidney disease (CKD): 4/36 cats with CKD tested positive for E. cuniculi antibodies in blood but this prevalence was not significantly different (P>0.05) from cats without CKD (Hsu et al., 2011).

Meningoencephalitis (ME): Künzel et al. (2017) concluded that E. cuniculi was unlikely to be directly associated with (non-suppurative and/or granulomatous) ME in cats in Austria; none of 30 affected cats examined by immunohistochemistry were positive.

Detection of antibodies in blood by Western blot or IFAT remains the major means of pre-mortem clinical diagnosis in animals. As the IFAT is quick and easy to perform, it is recommended for routine use in the diagnosis of feline encephalitozoonosis (Künzel et al., 2014). However, antibodies have been detected in cats that appeared to be clinically healthy, which has to be borne in mind when interpreting positive results: a positive result supports a diagnosis of encephalitozoonosis, but is not confirmatory.

E. cuniculi spores are difficult to observe when the samples are stained with haematoxylin and eosin, particularly when there is an inflammatory reaction and tissue damage. The spores are easily mistaken for other microorganisms, such as fungi (yeasts), protozoa and bacteria. Modified trichrome stain (MTS) and Gram stain, detected by light microscopy, and calcofluor white stain, detected by ultraviolet light microscopy, are the best stains for detecting spores of E. cuniculi in paraffin-embedded tissues. These stains were superior to Warthin–Starry, Ziehl–Neelsen, Giemsa and periodic acid–Schiff reaction for identifying spores without background ‘noise’ or monochromatic interference. In addition, these stains allow individual spores to be discerned in paraffin-embedded tissues. MTS allows observation of the polar tube, polaroplast and posterior vacuole, the most distinctive parts of the spore (Rodriguez-Tovar et al., 2017).

Fenbendazole is used to treat E. cuniculi infection in cats at a dose of 20 mg/kg q24 h for three weeks (Benz et al., 2011).  Cataracts can be successfully treated by phacoemulsification alongside medical treatment for E. cuniculi and symptomatic therapy for uveitis (e.g., ointment or drops containing dexamethasone), as reported by Benz et al. (2011).

There is no commercially available vaccine to prevent E. cuniculi infection in rabbits or cats. It is noteworthy, however, that an experimental vaccine containing inactivated spores was shown to induce a long-lasting antibody response in rabbits (Sobottka et al., 2001). However, it is unknown whether antibodies are protective in this infection.

Where cats and rabbits are kept together, the main method of prevention of infection is by maintenance of excellent hygiene. Heat or steam cleaning will be the most effective means of eliminating E. cuniculi spores.  Rabbits suspected to be infected should be tested and treated.

The safest option for individuals – both cats and humans – that consume rabbit meat is for E. cuniculi-free sources to be used.  However, the prevalence of E. cuniculi is extremely high in rabbits kept for meat: 100% of 13 rabbit farms in Italy contained seropositive rabbits (Lonardi et al., 2013), and active E. cuniculi infections were determined in 85.9% and 56.3% of rabbits in commercial and household farms, respectively, in the Czech and Slovak Republics (Neumayerová et al., 2014). Where rabbit meat is prepared for feline or human consumption, it should be well cooked. Microsporidian spores in fish were shown to be inactivated by heating to 60°C for 10 min or by microwaving at 750 W, for 20 s (Leiro et al., 2012); similar treatment is likely to be effective for rabbit meat.  However, Graczyk et al. (2007) found microwaving to be ineffective against the spores of E. bieneusi and E. intestinalis in sewage sludge, and pasteurisation failed to inactivate spores in milk (Kváč et al., 2016) so more work is needed to determine appropriate conditions to inactivate E. cuniculi spores.  Microsporidian spores in fish were also inactivated by freezing at -20°C for more than 48 hours (Leiro et al., 2012).

Any area used to prepare rabbit meat should be thoroughly cleaned then disinfected with sodium hypochlorite (household bleach), ensuring a contact time of at least 16 min (Wolk et al., 2000), followed by rinsing with boiling water or steam cleaning. Similar precautions are recommended for pig meat, which Sak et al. (2019) recently reported can also contain E. cuniculi spores. Exposure to 70% ethanol for 15 min inactivated microsporidian spores in fish (Leiro et al., 2012), and so is likely to be effective for cleaning hands and utensils following the preparation of rabbit or pig meat (although use of disposable gloves would be more practical in the case of hands).

The ABCD recommends that immunosuppressed cats should not have any contact with infected rabbits or their urine and faeces.

Since E. cuniculi is a zoonotic infection (Mathis et al., 2005), veterinary surgeons and nurses should wear gloves when dealing with infected cats or rabbits.  Calcium oxide (quicklime, burnt lime) was 100% effective in inactivating microsporidian spores in landfill leachate and sewage sludge (Graczyk et al., 2007), so could be used in the disposal of infected cadavers.

The ABCD thank Barbara Nell (Specialised Clinic for Ophthalmology at the Clinical Unit of Small Animal Surgery, University of Veterinary Medicine, Vienna) for providing the photo for Figure 1. The authors are deeply grateful to Dr Petra Benz for helpful comments which improved this guideline.

Künzel F, Peschke R, Tichy A, Joachim A (2014): Comparison of an indirect fluorescent antibody test with Western blot for the detection of serum antibodies against Encephalitozoon cuniculi in cats. Parasitol Res 113(12), 4457-4462.

Pan-European Study on the Prevalence of the Feline Leukaemia Virus Infection...