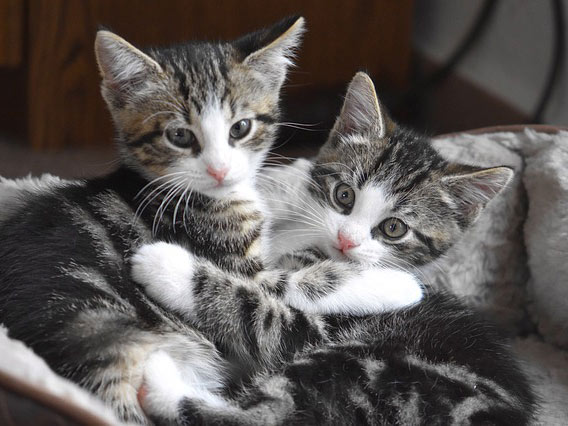 These guidelines were drafted by Tadeusz Frymus et al.

Cats have an endotheliochorial placenta that is a barrier for immunoglobulins, preventing their passage from the maternal serum into the fetal circulation. It is generally believed that only up to 5-10% of the maternally derived antibodies (MDA) are transferred during pregnancy from an immune queen to the fetuses (Scott et al., 1970; Schultz et al., 1974; Tizard, 1996). Claus et al. (2006) found that none of 182 neonatal kittens had detectable IgG or IgA serum levels at parturition. This confirms that in cats the vast majority, if not all, of MDA is transferred to the offspring via colostrum, which contains trypsin inhibitors that protect immunoglobulins from degradation in the gastrointestinal tract of the newborn. The dominating immunoglobulin class in colostrum is IgG, which is concentrated 2-5 fold in the milk gland from the serum of the queen (Pu and Yamamoto, 1998; Claus et al., 2006).

Mammalian neonates absorb intact colostral immunoglobulins from the intestinal lumen into the circulation. However, this ability decreases rapidly and generally ceases by 24 hours after birth. A neonatal kitten is able to absorb immunoglobulins most efficiently within the first 16 hours of life (Casal et al., 1996). The higher the levels of antibodies in the colostrum, the more likely the kitten will receive adequate levels of antibodies from its mother. The transfer of MDA is so efficient that in some kittens the level of circulating antibodies may be even higher than in their mothers (Yamada et al., 1991; Claus et al., 2006).

Several factors may impair the transfer of MDA to the neonates resulting in hypogammaglobulinaemia in the kittens, such as delayed onset of nursing and poor colostrum intake within the first 16-24 hours after birth. Therefore, orphaned neonates or those rejected before nursing (as well as those removed before nursing to avoid neonatal isoerythrolysis) are at risk, as well as kittens from very large litters, small or weak neonates, and offspring from queens that fail to produce colostrum with adequate immunoglobulin content. Failure of MDA transfer leads to a very high risk of sepsis or other severe infection and death within the first 2 weeks of life. Hypogammaglobulinaemia in a kitten older than 16-24 hours can be corrected by s.c. or i.p. administration of 3-5 ml of serum from a healthy, properly vaccinated cat, preferably living in the same environment as the affected kitten (Levy et al., 2001). Attempts to replace feline serum by equine IgG have been unsuccessful (Crawford et al., 2003).

Immunoglobulins are present not only in colostrum, but also in feline milk. These are, however, not derived from the mother’s serum, but produced in the milk gland. Such lactogenic immunity provides local protection on the mucosal surfaces of the offspring, especially in the gastrointestinal tract, and seems to play a protective role until weaning. These secretory immunoglobulins are also present in the colostrum, and are absorbed into the circulation of the newborn before being released back onto mucosal surfaces.

Colostrum and milk of other mammals has been shown to contain numerous other components that may contribute to the protection of the suckling offspring and that may also promote the development of neonatal immune competence (Kelleher and Lönnerdal, 2001). These include lysozyme, lactoferrin, peroxidase, complex oligosaccharides, mucins, cytokines, chemokines, leukocytes and others. In neonatal piglets and lambs, it has been demonstrated that lymphoid cells derived from colostrum were absorbed from the gut and transported to the mesenteric lymph nodes (Tuboly and Bernáth, 2002). Furthermore, vaccination of ewes with tetanus toxoid showed that absorbed lymphoid cells remained immunologically active and were able to transfer immune information to the lambs. There is, however, no information about such colostral activity in cats.

Passively acquired, circulating immunoglobulins provide immediately systemic protection that is essential in the early life of the kittens. As in all mammals, passive immunity in cats is very effective but short lasting. Circulating MDAs are catabolized by the neonate, thus their concentration gradually decreases with age. In kittens the serum IgG levels decline continuously from the peak on day 2, reaching a nadir between the age of 4-5 and 16 or more weeks of age. The period of this elimination depends strongly on the initial MDA level in the circulation of the neonate after colostrum uptake, environmental factors and the respective antigens. As a result, there are great differences between kittens (and also between littermates) in the period of protection afforded by circulating MDA.

It is generally believed that, similar to most mammals, kittens are able to generate an immune response to antigens from birth, but, compared to adult animals, this response is impaired unless the immune system is mature (Day, 2007a). It has been demonstrated that IL-2 production after Concanavalin A stimulation is much lower in kittens of less than 10 weeks of age compared to adult animals (Levy and Tompkins, 1998). Another example of immune system maturation is the development of resistance to feline leukemia virus (FeLV) infection in kittens. An experimental infection resulted in persistent viraemia and FeLV-related disease in 100% of newborns, in 85% of kittens inoculated at 2 weeks to 2 months of age, but in only 15% of cats infected at 4 months or 1 year of age (Hoover et al., 1976).

Vaccination of kittens should be avoided in the first 4 weeks of life, not only because of immaturity of the immune system. There is also some risk that live, attenuated vaccine organisms administered to very young animals could induce disease. Finally and most importantly, high levels of MDA inhibit endogenous antibody production. Therefore, very young kittens are able to generate an effective serological response to vaccination only when the levels of MDA against the respective antigen had decreased below an inhibiting threshold. This blocking effect of MDA can be partially broken by increasing the concentration of the vaccine antigen, such as by administering high titers of attenuated organisms in each vaccine dose.

As mentioned above, there are great differences among kittens in the duration of protection provided by MDA, and this variable period usually corresponds to the time when vaccines are less (or not) effective. This period encompasses the first 4-6 weeks of life for feline coronavirus (FCoV) (Pedersen et al., 1981), 6-8 weeks for feline leukaemia virus (FeLV) (Jarrett et al., 1977) and feline herpesvirus (FHV) (Edwards et al., 1977; Povey, 1979), 10-14 weeks for feline calicivirus (FCV) (Johnson and Povey, 1983), and 12 weeks for feline immunodeficiency virus (FIV) (MacDonald et al., 2004). For panleukopenia virus (FPV) it has been assessed as 8-14 weeks (Scott et al., 1970), although more recent studies suggest that MDA can persist until the age of 16 or even 20 weeks (Jakel et al., 2012).

It is common practice to perform the first core vaccination at 8-9 weeks of age (or earlier in kittens at special risk or in rescue shelters), and to give additional doses at 2- to 4-week intervals until the age of 12-16 weeks or older (e.g. for FPV) (Hosie et al., 2015), with the expectation that one of these vaccinations will fall after the blocking effect of the MDA and before exposure to virulent agents.

With this strategy some doses may be given with no benefit, as the kitten may have already responded to an earlier vaccine application and therefore may already be immune. In addition, no information is available to assess whether the last vaccination had induced adequate immunity. To avoid this problem, ideally, the optimal age for the first core vaccination should be determined by serological testing of each kitten. Titer testing can be performed before vaccination to determine the start of the kitten vaccination or approximately 4 weeks after the last dose to monitor the response to vaccination. However, serological testing is still expensive and often impractical.

In other species there have been some attempts to overcome the blocking effect of MDA by using new vaccine technologies. Hamers et al. (2007) demonstrated that 5-6 day old piglets with high levels of anti-pseudorabies virus MDA vaccinated with a DNA vaccine were efficiently primed, as a second vaccination at 11 weeks of age elicited a strong anamnestic response. Immunity induced in this way protected against challenge with virulent pseudorabies virus at 22 weeks of age. Similarly, a recombined canarypox-vectored distemper vaccine given twice (at the age of 7-9 weeks and again, 3 weeks later) to puppies with high anti-distemper MDA elicited seroconversion, determined 2 weeks after the second vaccination (Pardo et al., 2007). In contrast to non-vaccinated control animals, all vaccinated puppies survived a challenge with virulent distemper virus, with some of them showing only mild clinical signs. There are no published data about the vaccination of kittens during the period of high MDA levels.

Another important issue is the safety of kitten vaccination. In the UK the Veterinary Products Committee presented data that (between 1985 and 1999) 44.8% of vaccine suspected adverse reactions occurred in cats younger than 6 months compared with 18.8% of 1361 non-vaccine suspected reactions (Day, 2007b). This suggests that vaccine-associated adverse reactions are more prevalent in young cats. This could indicate a higher susceptibility of younger cats, or may simply be a consequence of more frequent vaccinations at this age, as another analysis of reactions occurring within the 30 day period following feline vaccination showed that there was a peak at 1 year of age (Moore et al., 2007). There are no data suggesting that starting kitten vaccination at 6-8 weeks of age might be more harmful than immunization in older cats.

GUIDELINE for Vaccination of Immunocompromised Cats