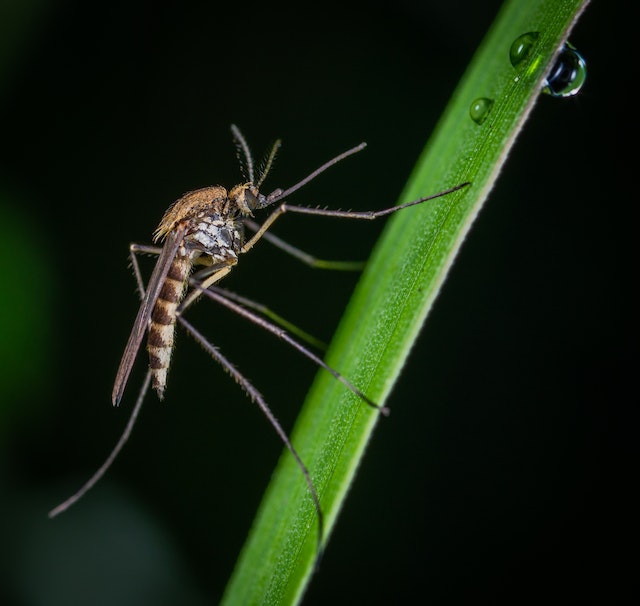 The West Nile virus infection guidelines were first published in the J Feline Med Surg 2015; 17: 617-619; the present update has been authored by Herman Egberink.

West Nile virus (WNV) is a zoonotic mosquito-borne virus belonging to the family Flaviviridae, genus Flavivirus in the Japanese encephalitis antigenic group. It is an enveloped virus containing a single molecule of linear, positive-sense, single-stranded RNA. Several phylogenetic lineages can be distinguished but most isolates can be assigned to lineages 1 and 2. WNV has a broad host range, mainly birds and mosquitos, but also mammals – including humans – reptiles, amphibians and ticks. It can cause disease in humans, horses and several species of birds. The severity of the disease depends on the (neuro-) virulence of the infecting virus strain. Disease is uncommon in other wild and domestic animals. In domesticated animals, disease has been incidentally reported in alpacas, sheep, reindeer, dogs and also cats (Petersen et al., 2013).

WNV was first identified in 1937 from the blood of a febrile patient in the West Nile district of Uganda. Since then, the virus has spread form Africa via migratory birds to other parts of the world including Central and Southern Europe, Asia and Australasia (Petersen et al., 2013; Sambri et al., 2013). In 1999, the virus was introduced into North America, in the city of New York, causing encephalomyelitis in horses, birds and humans. Since then, the virus has spread across the USA and parts of Latin America and Canada (Petersen and Hayes, 2008).

WNV is maintained in a bird-mosquito-bird transmission cycle. The most important vectors are bird-feeding mosquitos of the Culex genus. More than 300 species of birds have been reported to be infected with WNV, but maintenance and amplification mainly involve passerine birds (Komar et al., 2003). These birds develop viraemia levels that are sufficient to infect mosquitos feeding upon them. Mortality differs between bird species. High mortality is seen especially in corvids and robins. In other species of wild birds, and also chickens and pigeons, infection remains subclinical. In these latter species a low-magnitude viraemia develops which is unlikely to be sufficient to infect again mosquitos. Also, humans and other mammals develop low levels of viraemia and are therefore considered dead-end hosts and not important as virus reservoirs (Petersen et al., 2013). 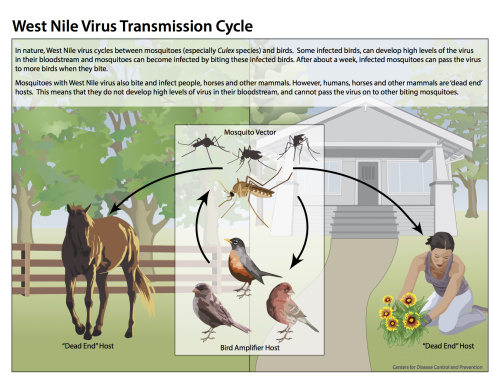 As with other mammals and birds, cats can be infected through mosquito bites but also orally by eating infected small mammals and probably also birds as evidenced by serological studies and experimental infections (Austgen et al., 2004). In a serological survey conducted in St Tammany Parish, Louisiana (USA), 9% of cats were shown to be seropositive, with stray cats having almost 3 times the WNV seroprevalence as family cats, although the difference was not significant (Kile et al., 2005). Seropositive cats were also identified in other areas of the USA and China with percentages of seropositive animals ranging from 10-15% (Lan et al., 2011; Levy et al., 2011). In a recent study from Argentina only 2 out of 94 cats (2.1%) were found to be seropositive (Currenti et al., 2020).

Infection occurs mainly through inoculation of virus by a mosquito bite. Initial target cells are keratinocytes and skin-resident dendritic cells (DCs; Lim et al., 2011). The latter cells migrate to draining lymph nodes where initial replication occurs. From there, the virus spreads to visceral organs, including the spleen. The target cells in spleen and other visceral organs are thought to be DCs, macrophages and neutrophils. Viral replication leads to viraemia. The virus enters the central nervous system (CNS), resulting in inflammation of the medulla, brain stem and spinal cord (Martin-Acebes and Saiz, 2012).

Although seroprevalence of WNV infection in endemic areas can be high, clinical disease and mortality are rarely reported. It seems that most infections are subclinical in nature.

In 33 cats from Germany with non-suppurative meningoencephalitis of unknown origin, positive immunostaining was detected for WNV antigen in 4 cats. All four cats had shown neurological signs. However, WNV infection could not be confirmed by PCR analysis and the positive WNV reactions might have been due to infections with cross-reactive agents or caused by molecular mimicry of host-derived antigens (Schwab et al., 2007; Schaudien et al., 2008).

During the 1999 outbreak of WNV infections in New York City, mortality was observed in humans, horses and one cat (Komar, 2000). In cats that were experimentally infected through mosquito bites, mild, nonspecific signs including lethargy and a modest decrease in appetite were observed during the first week after challenge. No neurological signs occurred (Austgen et al., 2004). Infection could also be established after oral exposure through ingestion of infected mice. The magnitude and duration of viraemia was similar to that in cats infected by mosquito bites. However, clinical signs were not observed. The level of viraemia in cats was higher than that in dogs that were included in the same study. The duration of viraemia ranged from 3.5 to 4.5 days. The level of viraemia observed in cats might be high enough to infect mosquitos at low efficiency. However, cats are not considered to be epidemiologically important amplifying hosts.

Since infection in cats is mostly subclinical, the need for specific diagnostic tests for cats for WNV is limited. In humans and horses, a diagnosis of WNV infection can be established through detection of the virus or virus specific antibodies. Acute infection can be confirmed by detecting virus-specific IgM antibodies, although antibodies can still be absent in the early phase of infection. Also, a significant rise in WNV antibodies in paired acute and convalescent sera can be determined as evidence of acute infection. A test for neutralizing antibodies can also be performed but this requires special facilities and will not be offered by most laboratories. Other serological assays are performed, like an epitope-blocking ELISA (Blitvich et al., 2003). If these tests are to be used in the diagnosis of infection in cats, these assays need to be standardized for use with feline sera.

Viral nucleic acids can be detected by reverse transcriptase polymerase chain reaction (RT-PCR) in blood samples or affected tissues at necropsy. However, viraemia is short-lived and PCR might be negative in a patient at the time of clinical presentation. Virus can also be detected in tissues by in situ hybridization and immunohistochemistry.

A commercial vaccine for cats is not available. Since current WNV strains cause no or rarely minimal clinical signs, a feline vaccine is currently not required.

For protection against WNV infection in horses, several vaccines are available. The efficacy of a recombinant canarypox-vectored WNV vaccine was also studied in dogs and cats (Karaca et al., 2005). As expected, clinical signs did not develop in any of the cats (control and vaccinated animals) after challenge. However, the vaccinated cats were shown to develop virus-neutralizing antibodies and were protected against viraemia after challenge. This shows the potential of the vaccine for protection against infection in cats.

Mosquito control can reduce the risk of infection through mosquito bites. Similar control measures as for prevention of bites in humans and horses might be taken in cats.

Humans are mainly infected with WNV through the bite of mosquitos. Mosquitos become infected through blood of infected birds, the natural hosts of the virus. Infected cats are not considered a direct source of infection for humans.

ABCD Europe gratefully acknowledges the support of Boehringer Ingelheim (the founding sponsor of the ABCD), Virbac and IDEXX GmbH.