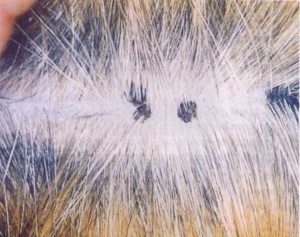 The feline viral papillomatosis guidelines were first published in J Feline Med Surg 2013; 15: 560-562; the present update has been compiled by Herman Egberink. 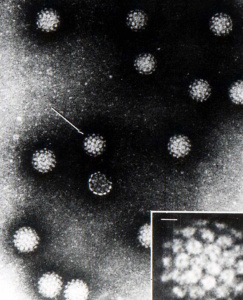 Papillomaviruses cause cutaneous lesions in man and several animal species, including cats (Munday, 2010). In each host different papillomavirus types exist, which is also true for cats (Munday, 2008). The viruses tend to be species specific, but sequences related to bovine and human PVs have been found in cats, suggesting cross-species transmission (O’Neill 2011; Anis, 2010). To date, four feline PVs from domestic cats have been fully sequenced and classified (Munday, 2014). These viruses were designated as Felis domesticus PVs (FdPVs), but recently changed to Felis catus PVs (FcaPVs; Munday et al., 2013). Papillomavirus infection has also been detected in other felids including the Florida panther, Bobcat, Asian lion, Snow leopard and clouded leopard (Sundberg, 2000).

A clear association between Papillomavirus DNA (the Felis domesticus papillomavirus 2 – FdPV-2) and squamous cell carcinomas (SCCs) was reported; DNA was detected in all 20 bowenoid in situ carcinomas (BISCs) examined, and in 17 of 20 cases of invasive squamous cell carcinomas (ISCCs; Munday et al., 2008). However, FdPV-2 DNA was also present in 52 % of normal skin swabs (Munday and Witham, 2010). Although FdPV-2 has been detected most frequently in BISCs and SCCs, other PV types have also been identified. Recently, a novel PV type, designated FcaPV-3 was detected in a feline BISC (Munday et al., 2013). In one study, 50 % of the sequenced PV DNA was most closely related to human PV DNA. In another study, PV DNA could not be detected in any of 30 oral squamous cell carcinoma (OSCC) samples screened (Munday et al., 2011), which is at variance with earlier observations.

Papillomaviruses are epitheliotropic; infections usually occur through lesions or abrasions of the skin. Initially, the basal cells of the stratum germinativumare infected, which leads to hyperplasia and delayed maturation of cells in the stratum spinosum and granulosum. In the basal cells only early gene expression occurs, whereas viral protein synthesis and virion assembly occurs in terminally differentiated cells of the stratum spinosum and, more specifically, the stratum granulosum. Virus is present in the differentiated keratinized cells and is shed with exfoliated cells of the stratum corneum. Papillomaviruses are commonly found in normal skin of different animals, including the cat. This makes definite proof of a causal relationship between the presence of PV sequences and skin lesions difficult.

In cats PVs have been associated with different skin lesions.

First, cutaneous hyperkeratotic plaques seem to be most common in older and immunosuppressed cats, e.g. FIV infected animals (Egberink, 1992; Carney, 1990). However, plaques have also been reported in cats without any recognized immunodeficiency (Wilhelm, 2006). The plaques appear as flat, slightly raised scaly and variably pigmented lesions (Fig. 2).

Second, viral plaques can progress into Bowenoid in situ carcinomas (BISCs), which can progress to invasive squamous cell carcinomas (ISCCs). Feline BISCs occur often in pigmented, haired skin and appear as crusting, hyperpigmented and roughly circular lesions. Sunlight plays a role in the development of ISCCs, where lesions are found more often than not in sparsely haired areas such as eyelids, nose and pinnae.

A clear association between Papillomavirus DNA (the Felis domesticus papillomavirus 2 – FdPV-2) and SCCs was found; it was detected in all 20 BISCs examines, and in 17 out of 20 cases of ISCCs. However, FdPV-2 DNA could also be detected in 52% of normal skin swabs (Munday, 2010). In one study 50% of the sequenced PV DNA was most closely related to human PV DNA. In a recent study, PV DNA could not be detected in any of 30 OSCC samples screened (Munday, 2011), which is at variance with earlier observations. 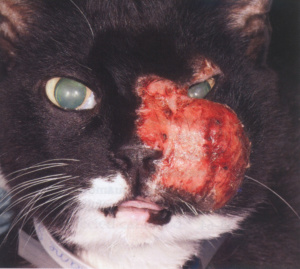 Third, feline cutaneous fibropapillomas or feline sarcoids may be due to a  PV infection. They are rare, occurring as skin neoplasms, nodular masses found most commonly on the head, neck, ventral abdomen and limbs (Fig. 3.). The finding of a papillomavirus similar to bovine papillomavirus type 1, and the higher prevalence in cats with known exposure to cattle suggest an association with the bovine virus (Schulman, 2001; Munday, 2010). This hypothesis is in line with the known association between bovine PV and equine sarcoids.

Fourth, PVs have been associated with feline cutaneous papillomas (Munday, 2007).

A biopsy from a skin lesion can be taken for histopathologic examination and immunohistochemical staining of papillomavirus group-specific antigens. By electron microscopy, intranuclear papillomavirus-like particles might be demonstrated in keratinised cells. Also PCR can be used to demonstrate PV DNA in the lesions and for identification of the viral strain by further sequencing. However, the presence of PV DNA in normal skin of cats makes interpretation of positive PCR results of skin lesions difficult.

No specific treatment is known. In immunocompetent cats, spontaneous regression can be expected, as it also seen in dogs, but it takes a long time, up to several months. Feline invasive SCCs tend to slowly metastasize. Therefore, if anatomical location allows, complete excision might be curative.