Plague due to Yersinia pestis 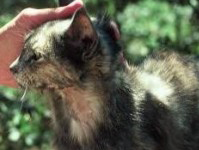 Yersinia (Y.) pestis is a Gram-negative nonmotile, rod-shaped, facultative anaerobe with bipolar staining (giving it a safety pin appearance) that belongs to the family Enterobacteriaceae. It is the causative agent of plague, a rare but often fatal zoonosis of historical significance in Europe (Black Death). Y. pestis is resistant to low temperatures and freezing, but sensitive to high temperatures (Chomel, 2012).

The plague is currently endemic in many parts of the world and foci of plague occur in Asia, Africa and the Americas in semiarid areas where flea vectors are active all year round and rodent reservoirs are abundant (Valles et al., 2020).

Currently most of human cases occur in Africa but Y. pestis is present in at least 33 countries with sporadic cases in USA and China. Countries with human cases notified to WHO between 2013 and 2018 are listed in Table 1.

Table 1: Countries where human plague has been notified to the WHO between 2013 and 2018 (Valles et al., 2020, modified). However, outbreaks in the last ten years have involved countries other than those listed in Africa, Asia and South America.

The bacteria is spread between rodents by fleas and different rodent reservoirs, flea vectors and climatic and ecological characteristics are specific for each focus. Epidemics in rodents expose humans and domestic animals to plague (Chomel, 2012). Antibody testing of exposed dogs and cats is used in rural areas of countries afflicted by recurrent epidemics as they are domestic sentinels of infection activity in potential focal areas (Oyston and Williamson, 2011; Sousa et al., 2017).

The infection is maintained by a flea-rodent-flea cycle as fleas, such as Xenopsylla cheopis, that have fed on bacteraemic rodents are efficient transmitters of the infection to nearly all mammals and they may remain infected for more than one year (Fig. 1). 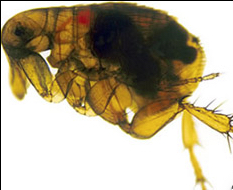 Fig. 1. Oriental rat flea (Xenopsylla cheopis) infected with the Yersinia pestis bacterium which appears as a dark mass in the gut: The foregut (proventriculus) of this flea is blocked by a Y. pestis biofilm; when the flea attempts to feed on an uninfected host, Y. pestis is regurgitated into the wound, causing infection. Source: https://en.wikipedia.org/wiki/Yersinia_pestis

However, not all flea species are efficient vectors: Ctenocephalides spp. are considered poor transmitters of plague (Chomel, 2012).

In dogs and cats, rather than bites from infected fleas, ingestion of infected rodents or lagomorphs is considered the most common way of transmission (Watson et al., 2001). Less common is transmission through contact with Y. pestis on mucous membranes, skin lesions or inhalation of infected aerosol droplets from infected individuals suffering from the pulmonary form (Eidson et al., 1991).

In the case of human infections, most are acquired via flea bites with a smaller proportion via direct contact with animals (but with wild animals more often than with cats). Dogs and cats can also be a source of infected fleas for human infections.

After inoculation by infected fleas, Y. pestis replicates in mononuclear cells and is carried to the regional lymph node. After replication in mononuclear cells the bacterium acquires a capsular envelope which is a resistance factor against phagocytosis by neutrophils. Organisms transmitted by ingestion or inhalation come from a susceptible host and are already protected against phagocytosis by the capsule. In this case the incubation period is shorter (1-3 days) (Chomel, 2012).

Antibodies are produced after infection and in an experimental cat infection with transmission performed by ingestion, the highest antibody titres developed in cats shedding the organism for an extended period of time. A positive antibody titre does not protect against bacteraemia or death (Gasper et al., 1993).

The bubonic form is most common; usually it is associated with necrotic stomatitis and involves the mouth mandibular or sublingual lymph nodes (Fig. 2) as the infection is frequently acquired by preying on infected rodents. Drainage of abscesses improves the prognosis. 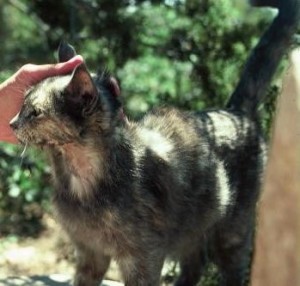 Septicaemic forms can involve any organ (mainly the lungs), with high fever, a clinical presentation of endotoxic septic shock and death within 48 hours. The pneumonic form has the worst prognosis and can develop from one of the previous forms or, rarely in the cat, can occur as the primary form (Eidson et al., 1991; Carlson, 1996; Watson et al., 2001).

Detection of the infectious agent

Clinical suspicion is confirmed by cytology on smears from draining lesions, on which only Gram-negative organisms with a bipolar safety-pin shape are seen (Chomel, 2012). Bacteria can be isolated from the tonsils, blood or other infected tissues in reference laboratories but results require a minimum of four days; transportation is subject to class II precautions (hazardous agents).

The WHO gold standard for plague diagnosis remains bacterial culture, however new diagnostic tools have been developed and used in human plague outbreaks (Valles et al., 2020). They include a rapid antigen test based on monoclonal antibodies against the F1 capsular antigen of Y. pestis and PCR assays (Valles et al., 2020).

Different treatment protocols have been used in humans to treat the plague but only a small, randomized trial with gentamycin and doxycycline has been performed. A serious threat is the possibility of plasmid resistance transmission from other members of the Enterobacteriaceae family (Valles et al., 2020). Gentamycin is the drug of choice, sometimes in combination with fluoroquinolones; doxycycline is used in less severe cases (bubonic form) or for prevention in cats with known contact with infected animals (Orloski and Lathrop, 2003).

The prognosis for a cat with plague is guarded, especially in case of the pneumonic form, in case of a high and continual fever, or of signs of endotoxic shock (Gasper et al., 1993). The overall mortality rate is about 50% (Chomel, 2012) but mild forms of disease or asymptomatic infections can occur and are demonstrated through cats testing antibody positive during surveillance programs (Sousa et al., 2017). In case of bubonic form, drainage of abscesses improves the prognosis.

Vaccines for cats are not available.

Strict flea control should be implemented in endemic areas and outdoor lifestyle should be avoided in case of epidemics to prevent predation. Doxycycline is used for prevention in cats with known contact with infected animals (Orloski and Lathrop, 2003).

Countries with human cases notified to WHO between 2013 and 2018 are listed in Table 1. Between 1977 and 1988, several human cases of the plague were reported in the USA, in veterinarians, their technicians and in owners of sick cats after contact with infected cats (Chomel, 2012). Cats are considered the most important domestic animal involved in plague transmission to humans (Kassem et al., 2016). Outdoor cats in endemic areas can transmit the infection to their owners or to people caring for sick cats (veterinarians and veterinary nurses). Close contacts (like sharing the bed) are associated with a higher risk for human plague (von Reyn et al., 1977; Gould et al., 2008). Standard hygiene measures and strict flea control should be implemented in endemic areas. Suspected cases must be kept in isolation, and protective gloves, clothes, goggles and face masks must be used by the clinic staff.

In people, an infected flea bite leaves no lesion at the site of inoculation; mononuclear cells carry Y. pestis to the regional lymph node, where the “bubo” develops – a swelling with necrosis and suppuration with fistulous tracts (bubonic form). Subsequent dissemination to the lungs can follow in a few days (pulmonary form) and to other lymph nodes and tissues, which can show similar lesions (septicaemic form). In cases of transmission by ingestion or inhalation, the incubation period is even shorter. The clinical course can be rapid if endotoxic shock and disseminated intravascular coagulation (DIC) develop, otherwise it can last for 2-3 weeks (Chomel, 2012; Craven et al., 1991). Any delay in the diagnosis and treatment enhances the risk of mortality (Gage et al., 2000).Vaccines are available only for humans. A killed whole-cell vaccine induced short-term protection only and was taken off the market. Live-attenuated vaccines are able to induce long-lasting immune responses and were used in many countries, but their safety has to be improved and they are currently used only in Russia and other parts of Asia (Valles et al., 2020). Chemoprophylaxis is also used in humans to reduce secondary cases (Valles et al., 2020).