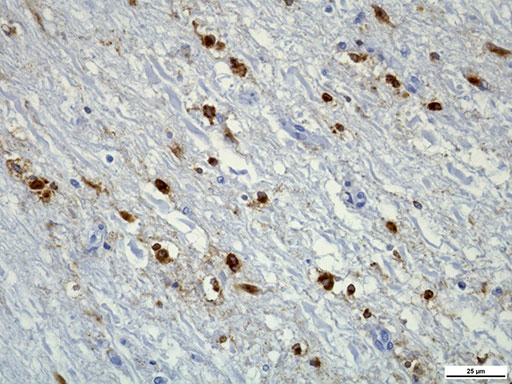 The Aujeszky’s disease guidelines were first published by Etienne Thiry et al. in the J Feline Med Surg 2013; 15: 555-556; the present guideline has been updated by Karin Möstl.

The natural hosts of ADV are domestic and wild suids. The clinical signs in these animals include respiratory, reproductive and neurological signs, depending on the age of the animal. Like other herpesviruses, ADV produces a latent infection in the host. In addition to suids, ADV can infect a wide range of species, including carnivores, which are considered dead-end hosts, because they experience a fatal neurological disease of very short duration.

Cats are infected with ADV mainly through the ingestion of raw pork, particularly of lungs or other offal. Transmission can also be indirect, without contacts, following viral excretion by pigs. In connection with an AD outbreak in sheep, cases in cats have been also observed (Henderson et al., 1995).

AD has been reported in a Florida panther (Felis concolor coryi; Glass et al., 1994) and in an Iberian lynx (Lynx pardinus; Masot et al., 2017). The Iberian Lynx was assumed to be exposed to ADV by ingestion of tissues from wild boars.

The virus enters via the oral route and replicates in tonsillar and pharyngeal tissues. It then spreads through the central nervous system via the cranial nerves and is excreted after experimental infection for the first two or three days post inoculation via oral and nasal secretions (Hagemoser et al., 1980). However, this excretion has no epidemiological consequences, since virus transmission by cats has never observed.

This feline disease was encountered only sporadically, mainly when cats were fed pig offal. As in dogs, the incubation period is short, no longer than 2 to 4 days. The infection causes an acute encephalitis, with excitation and hypersalivation as the initial clinical signs. Infected cats present with anorexia, sometimes with intense pruritus, which leads to lesions due to scratching and self-mutilation. A similar picture was also seen in the Iberian lynx (Masot et al., 2017). More copious salivation ensues, the nervous signs become more pronounced, cats show lack of coordination and finally paralysis. When this clinical picture is observed, it can be mistaken for rabies. However, cats that develop AD are rarely aggressive, and disease progression is more rapid than in rabies. The outcome is invariably fatal, within 12 to 48 hours after onset of the clinical signs (Maes et al., 1987).

Virus can be isolated from tonsils, lung, spleen and brain in various cell lines, usually pig kidney epithelial cells, in which a cytopathic effect typical for herpesviruses is visible. Immunoperoxidase staining can be performed on brain sections; the nuclei of infected cells would show a brownish precipitate (Fig. 1). 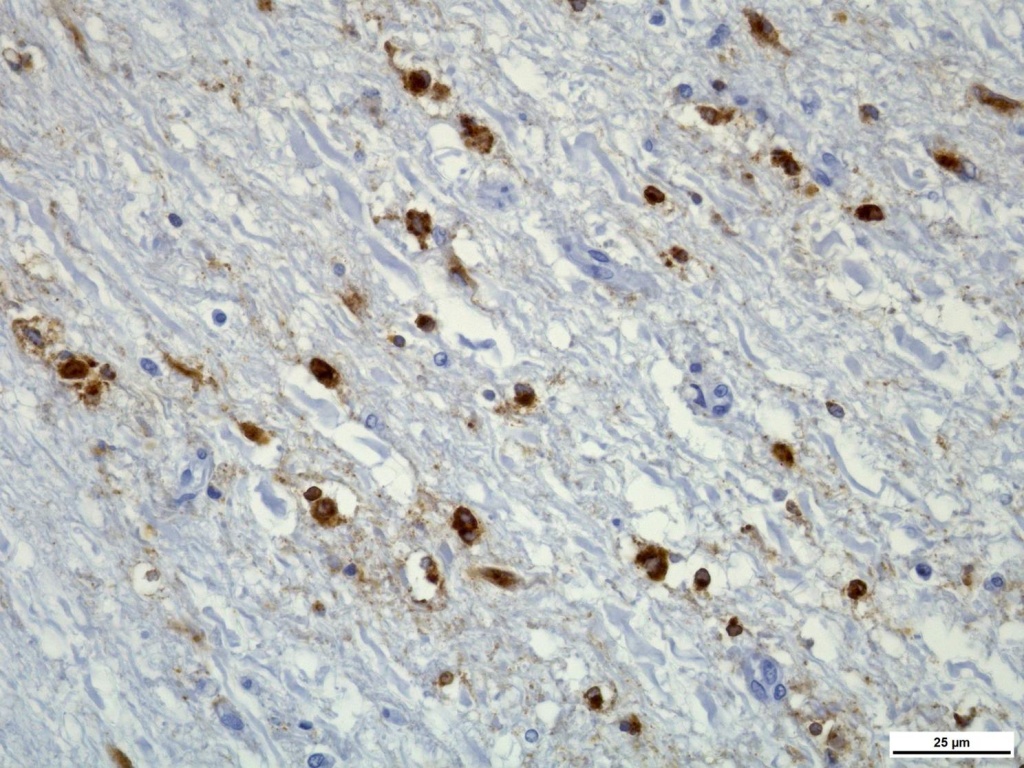 PCR for the detection of ADV in pigs can be used on brain and lung tissue homogenates from cats.

When encephalitis is seen in cats, and pseudorabies is suspected, as differential diagnosis other neurological diseases, among them rabies and feline infectious peritonitis have to be considered.

There is no treatment for this deadly disease. If a cat is diagnosed with AD, humane euthanasia should be performed.

The attenuated ADV vaccines used to protect pigs are still virulent for carnivores, including cats. Only inactivated or subunit vaccines are safe, but they have not demonstrated any efficacy against AD in cats. Infection of cats (and dogs) can be prevented by cooking pig meat or pork offal, by feeding commercial pet food, and avoiding contact with infected pigs (Thiry, 2006).