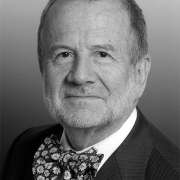 Professor Marian C. Horzinek was the scientific founder of ABCD and chairman until 2014. On July 28, 2016, he passed away in his 80th year of life.

Professor Horzinek studied veterinary medicine in Germany at Giessen and Hannover Universities, from 1956 to 1961. A year later he obtained his Doctor of Veterinary Medicine (Dr. med.vet.) and in 1970 he gained his ‘Habilitation’ (a PhD equivalent) in virology. He began his career in virology at the Public Health Laboratory in Hannover, where he worked as a research fellow of the Deutsche Forschungsgemeinschaft. He later helped to establish the Chair of Virology at Hannover Veterinary School, and then spent a year as a research fellow at the Instituto Venezolano de Investigaciones Cientificas in Caracas, Venezuela.

Upon his return, he became Head of the Exotic Diseases Division at the Federal Research Institute for Animal Virus Diseases in Tübingen, Germany. In 1971, he moved to The Netherlands where he was appointed Head of Department and Professor of Virology and Virus Diseases at the Faculty of Veterinary Medicine, Utrecht University. After 1992, Professor Horzinek has been director of Utrecht University’s Institute of Veterinary Research, and from 1996 until his retirement in 2001, he directed the Graduate School of Animal Health.

During his career, Professor Horzinek has gained prizes and awards from research organizations in Europe, Australia and Asia, and honorary doctorates from the Universities of Ghent (Belgium), Hannover (Germany), Uppsala (Sweden), Vienna (Austria) and Guelph (Canada).

His publications include >300 scientific papers and more than 30 books and monographs, handbooks in several languages and CD-ROM articles. He has been an editor or editorial board member for scientific journals published in the Netherlands, Belgium, Great Britain, Germany, Austria, France and Italy. He is the founding president of the European (now: International) Society of Feline Medicine, of the German Gesellschaft für Kynologische Forschung, the Prevention of Equine Diseases (PrEquId) Board, and recently became ambassador of the Black Jaguar Foundation, a non-profit organization with the objective to save the rainforest.