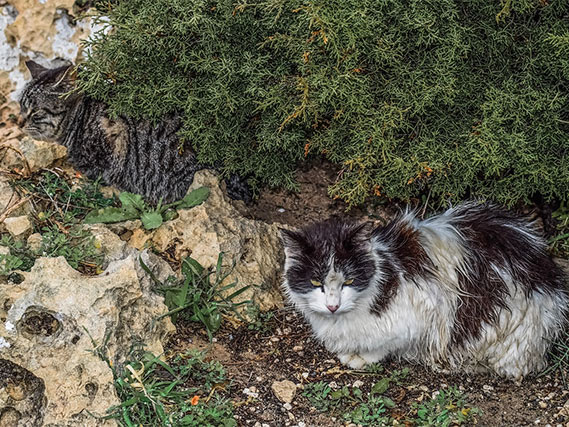 The rare opportunistic mycoses guidelines were first published in the J Feline Med Surg 2013; 15: 624-627; the present version has been authorised by Albert Lloret. The ABCD is grateful to Prof. Lluís Ferrer of the Foster Hospital for Small Animals, Cummings School of Veterinary Medicine, Tufts University, USA, who has graciously contributed to this article.

Rare systemic fungal infections in Europe are blastomycosis (caused by Blastomyces dermatitidis), coccidioidomycosis (caused by Coccidioides immitis) and histoplasmosis (caused by Histoplasma capsulatum). In endemic areas, these infections are more frequent in dogs; scientific data for cats are scarce and mainly based on a few retrospective case series or reports.

These diseases are endemic in some areas of the Americas, but in recent years more cases have been reported from non-endemic areas.1-5 At risk are mainly outdoor, free-roaming cats with contact to fungal organisms in the soil.1 However, an outbreak of blastomycosis has been reported in an urban non-endemic area (Chicago, Illinois), in five indoor cats; unusual drought was suggested as the most likely cause.2

Histoplasmosis has also been diagnosed in indoor cats, and in these cases, exposure has been associated to soil contamination due to construction work, potted plants and unfinished basements.6,7 The first reported cases of histoplasmosis in Europe and Japan have been recently published. In both cases diagnosis was confirmed by post-mortem examination, including histology, special stains and immunohistochemistry.3,5 Italy, Germany and Turkey should be considered endemic areas for histoplasmosis, as suggested by the European Confederation of Medical Mycology (ECME) Working Group.8

Few case reports and one case series of coccidioidomycosis have been published so far only in endemic areas. One cat imported from the USA has been diagnosed in Portugal.4

Fungal systemic mycoses are not contagious amongst cats, the infection occurs after contracting the organism from the environment. Inhalation of aerosolized conidia or spores establishes a primary infection site in the lungs, followed by yeast dissemination to the lymphatic, skeletal, CNS, the eyes and skin, where pyogranulomatous inflammation occurs.9

Systemic mycoses generally produce a combination of clinical signs related to the target sites of infection, including the respiratory tract (which usually is the primary focus), bone, CNS, eyes, lymph nodes and skin. 1,9

Cats with blastomycosis usually show pneumonia (dyspnea, tachypnea, coughing) and skin disease (non-ulcerated dermal masses or large abscesses) and non-specific signs like fever, lethargy, anorexia and weight loss.10,11 Chorioretinitis and common CNS signs may be also present in cats with disseminated disease.11 CNS infection rarely occur without evidence of systemic disease.12 Lymph node involvement is not a common feature.10,13 Abnormal blood values are non-specific, indicative of an inflammatory process. In one cat with pulmonic and cutaneous blastomycosis, hypercalcaemia and increased levels of calcitriol were found, which returned to normal after treatment.14 Thoracic radiographs mainly demonstrate nodular interstitial to alveolar patterns and areas of consolidation. Diffuse bronchial patterns are also observed.10,14 Immunosuppression and retroviral infection are not usually present in the cases reported.9,10

Demonstrating the presence of the yeast cells in affected tissues by cytology and/or histology usually results in the diagnosis. 1,9,15

The characteristic morphology of the yeast cells (thick-walled, 8-12 μm cells without capsule for B. dermatidis ; round to oval intracellular yeast cells with a basophilic centre surrounded by a light halo for H. capsulatum) is in most cases sufficient to confirm the diagnosis. Respiratory tract (by lung fine needle aspiration or bronchoalveolar lavage), skin, lymph node (not in blastomycosis) and bone marrow (histoplasmosis) samples are most suitable for diagnosis.9,15

Cytology is less reliable for the diagnosis of coccidioidomycosis.19,21,22

Histology is needed for diagnosis when cytology fails, especially in coccidioidomycosis.22 Pyogranulomatous inflammatory responses and the presence of yeasts with the typical morphology in each case are diagnostic. Special staining for fungal organisms (periodic acid-Schiff, Gridley’s or Gomori methenamine silver) may improve the sensitivity.9,15,22

Culture is the gold standard for the diagnosis, but not frequently performed in practice. Concerns about the potential danger for laboratory personnel handling the samples should govern the procedures.

Tests have been developed for the detection of blastomycosis antigen in blood and urine of dogs and humans.23 The highest sensitivity is achieved by testing both blood and urine. Cross-reactions occur with histoplasmosis, as the antigen is identical for both organisms; the test may therefore be seen as an assay to screen for both mycoses.24 Antigen detection tests have been used also to monitor responses to treatment and its duration.23,25 Antigen testing has not been critically evaluated in cats, and recommendations about its use cannot be given.

Assays to detect antibodies against these fungal organisms have been developed, but they are of low sensitivity and specificity for blastomycosis and histoplamosis, not discriminating between the present disease and previous exposure.1,9

In contrast, serology using an agar gel immunodiffusion test is the basis for the diagnosis for feline coccidioidomycosis. High sensitivity (83%) has been established in cats based on a retrospective study.19 False-negative results may be expected in the first two months of acute infection. Coccidioidomycosis is usually diagnosed by a combination of serology, cytology and/or histopathology.19,21,22

Itraconazole is currently the treatment of choice for blastomycosis and histoplasmosis.1,16,26 Amphotericin B and fluconazole may be used as well, especially in severe cases or CNS signs.1,16 In a study of 8 cats with histoplasmosis, long-term itraconazole treatment was well tolerated and cured all the patients.15

There are no vaccines available.

Systemic mycoses are not considered zoonotic, as they are not contagious amongst cats nor in cat-to-human contacts. Infection occurs by contact with spores or conidia from the environment where they reside as soil saprophytes. Concerns are justified about the potential danger for laboratory personnel manipulating samples for culture.

Only recently, the first case of a cat-to-human transmission of coccidioidomycosis has been reported; the infection was transmitted to a veterinary assistant through a bite by an infected cat.27